Airborne is a family owned business that has been making honey for over 100 years. 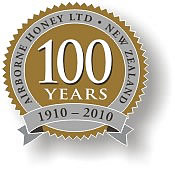 Clover honey is produced throughout most of New Zealand, but the South Island and Canterbury, Otago and Southland provinces in particular, are the prime areas of quality clover production. Clover honey is light in colour with a delicate floral bouquet and flavour. It is offered in both creamed and liquid forms providing both the ease of use for sweetening drinks, baking, etc. with liquid and the thick creamy texture for use as a spread.

Southern Rata is one of several species of Rata found in New Zealand but is the one that most regularly produces a honey crop, although even this honey is sometimes in very short supply. Anyone who has seen the Rata flowering in January in the Otira Gorge west of Christchurch cannot forget the sight of this brilliant red carpet covering the mountains. This area produces the purest Rata honey, very white in colour with a subtle, distinctive flavour, mild and rich - but not sweet, almost salty, considered by many to be the best of New Zealand Honeys.

Kamahi is a common tree found in many of New Zealand's rugged native forests, and is an excellent source of honey. The creamy coloured flowers are very attractive to bees and bloom in abundance throughout the Spring producing a light amber honey with a distinctive, full-bodied complexity of flavour preferred by many honey connoisseurs.

The 'Beaujolais' of honeys, Tawari is best savoured when young. It's origins are the lowland forests of New Zealand's far north where the elegant tree's waxy white flowers prized by ancient Maori gift the bees a light yellow nectar with a lingering butterscotch flavour. So subtle and mild, it's perfect for topping pancakes, waffles or icecream.

Rich and malty, this honey is full bodied yet not overly strong and has a beautiful burnished amber hue. And because the distinctive clustered red flowers of this New Zealand Honey suckle may not bloom well each year, Rewarewa is a premium variety. A hint of rustic woolsheds pervades the complex aroma. Rewarewa is a great natural sweetener for hot drinks.

Also commonly known as "Borage", this wild flower covers the hills of the Central South Island in a sea of brilliant blue colour during summer months. The seed, resembling a Viper's head, was once mistakenly used as a treatment for snakebite giving the plant its unusual name. Vipers Bugloss honey has a delicate flavour with a "chewy" texture. Hint: keep this in the refrigerator and you have a natural chewy snack for kids of all ages.​

Manuka is found throughout New Zealand and often forms extensive areas of bush. The leaves are dotted with oil glands, and when bruised give off a gingery peppery smell. The flowers vary from brilliant white through to rose-pink.

A delicious blend of characteristic  and wildflowers that include , ,  and . Some people find that manuka is too strong a flavour for their preference but still want a dark flavoursome honey. Manuka with Wildflower is just that product.

Honeydew nectar is produced from a small scale insect (Ultracoelostoma assimilie) living in the bark of two of New Zealand's beech forests, mostly black beech (black from the sooty mould growing on the surplus nectar covering the trunks and branches) and to a lesser extent, red beech. In the early morning sunlight, the droplets of nectar glisten like the the morning dew, giving the name honeydew. Honeybees gather this nectar to produce honeydew, a process they carry out in many other countries in the World, most notably in Germany's "Black Forest".

A full flavour and aroma, heady, almost pungent, malty. A thick red amber honey and one of our strongest flavoured. Great in marinades to give a richness to barbecues or roasts. Full of mineral goodness, a typical trait of honeydews.

Creamy, spreadable Manuka Multifloral honey has enough manuka to make this a pleasant flavour but still available at an affordable everyday price.

With a heritage dating back to the ancient tribes who cultivated the arid, unforgiving soils of the Mediterranean, Thyme continues to flourish today across Central Otago's similarly challenging environment. Its burnt grass colouring so aptly reflects the surrounding landscape. An intensely aromatic honey, the pale Thyme flowers imbue it with lingering, herby, savoury flavours enjoyed by the experienced honey connoisseur.

Creamy spreadable Bush honey. A stronger flavour for those with a desire for that nostalgic trip to the beekeeper or those wanting that extra flavour in their honey. A range of mixed bush sources including manuka. Caution! May be Addictive!